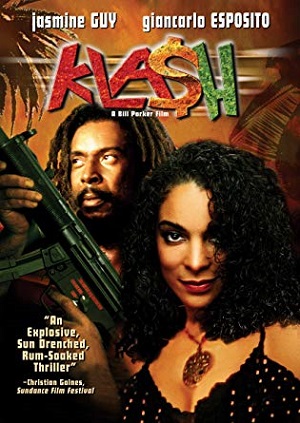 "An Explosive, sun-drenched, rum soaked thriller!" Hard-edged and erotic, and as full of suspenseful intrigue as the best film noir, Klash tells the story of a world-weary photographer who falls into the clutches of a beautiful dancehall girl and a world of crime, deceit and murder. Stoney (Griancarlo Esposito- "Homicide" Do The Right Thing) comes to Jamaica to photograph the Klash, an electrifying battle of the world's best dancehall and reggae performers. His ex-lover Blossom (Jasmine Guy - "A Different World") is a sexy star of the dancehalls and the mistress of the gang kingpin Mr. Lee. Every criminal in Kingston has their eye on the box office receipts from the Klash including Mr. Lee, and his own thugs, who plan to double cross him and steal the money from under his nose. Meanwhile, Stoney and Blossom's old chemistry ignites and soon Stoney finds himself entrenched in Blossom's plan to steal the cash for herself and to escape Kingston forever. The stakes become dizzyingly high as there is never honor among thieves, and the police, led by Lt. Loveless (Cedella Marley) are quickly closing in. Featuring Performances by: Shabba Ranks, Patra, Ninja Man, Bounti Killa, Snow, Papa San, Cobra, Prince Midas, Capelton Music by: Bob Marley Steel Pulse Shaggy Beenie Man Born Jamericans Chaka Demus & Pliers. Special Features: "Building Klash" (behind the scenes) Original Trailer/Chapter Selection Runtime 90 mins Xenon Entertainment Group.