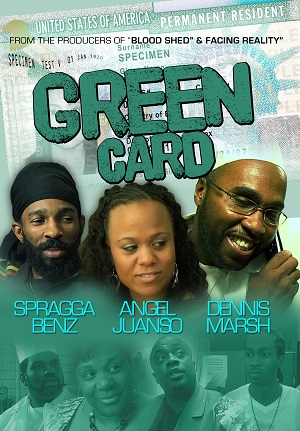 Written by Cleon James, who based the film on a close friends experiences in relationships. James reality drama, Green Card stars Dennis Marsh as Trevor, a Jamaican immigrant who wants to become a permanent resident and opts to take the marriage route. His cousin and immigration lawyer, Peter (Cleon James) encourages him to find a nice American woman and not the neighborhood’s drug dealer’s ex. As he’ll soon see, Trevor’s choice, Fluffy (Angel Juanso) proves to be a less than ideal life partner for this particular situation. All the while, Ricardo (Spragga Benz) tries to keep his Moorish sovereign while trying to adapt to the American culture and keep his girlfriend (Missy Soprano) happy. As Trevor begins to discover how hard it is to deal with his situation, and to maintain sanity in his life, he begins seeing Peter’s friend, Ms. Ivy (Vikki Harris), who might prove to be just as helpful personally as she is professionally. But will Trevor overcome Fluffy’s continued attempts to keep him away from getting his Green Card?