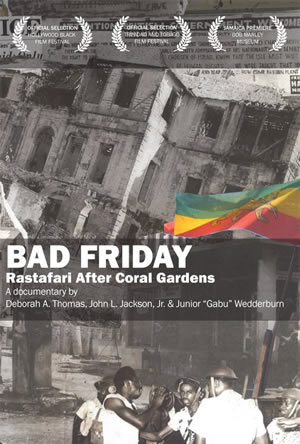 For many around the world, Jamaica conjures up images of pristine beach vacations with a pulsating
reggae soundtrack. The country, however, also has one of the highest per capita murder rates in the
world, and the population is actively grappling with legacies of Western imperialism, racial slavery, and
political nationalism – the historical foundations of contemporary violence in Jamaica and throughout
the Americas.
Bad Friday focuses on a community of Rastafarians in western Jamaica who annually commemorate
the 1963 Coral Gardens “incident,” a moment just after independence when the Jamaican
government rounded up, jailed and tortured hundreds of Rastafarians. It chronicles the history of
violence in Jamaica through the eyes of its most iconic community, and shows how people use their
recollections of past traumas to imagine new possibilities for a collective future.